Projection Wizard is a web application that helps cartographers select an appropriate projection for their map. Depending on the extent and the distortion property of the map, the application returns a list of proposed map projections with additional projection parameters if necessary. There are PROJ and WKT links next to each projection that open a popup window with a PROJ or Well-Known Text string available for copying to the clipboard. Both strings are used in many cartographic and GIS applications. Projection Wizard displays a map preview on the right side of the list with a suggested projection. The preview shows how the projected data will look using D3.

This tool is based on John P. Snyder’s selection guideline and on the extension to this guideline for world and hemisphere maps written by the Cartography and Geovisualization Group at Oregon State University. Projection Wizard v2.0 also takes into account the results of a study published by Šavrič et al. in 2015. All publications related to Projection Wizard are listed at the bottom of this page.

How to Use this Tool?

Using Projection Wizard is easy and requires only two steps:

1 From the radio button list, select the distortion property of the map.

2 Select the geographic extent by using the input boxes on the left side of the map or by changing the rectangle on the map.

The anchors at the corners of the rectangle allow it to be resized. The rectangle can also be dragged around the map. Any change to the rectangle is reflected in the input boxes and vice versa. Changes to the rectangle or distortion property interactively update the list of proposed map projections and the map preview below the web map.

a The Select Currently Visible Area button adjusts the rectangle size to the current map view, selecting approximately 80% of the visible map.

b The Select Entire World button sets the rectangle size to the full extent.

c The Show Entire World button zooms out to the full extent.

d The Customize button opens the Projection Wizard Options dialog, which allows the user to modify the tool. 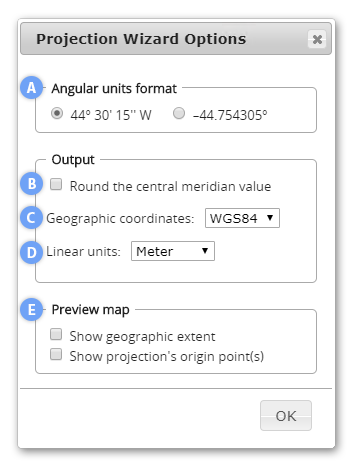 The Projection Wizard Options dialog allows you to modify the tool to better fit your needs. The options affect the projection parameters, elements in the PROJ and WKT strings, and the map preview. You can:

A toggle between decimal degrees and DMS formats for angular units,

B round the central meridian value to the nearest degree,

C select a system of geographic coordinates for the output strings,

D select between meters and international feet for linear units in the strings, and

E display the selected extent and/or the projection's origin point(s) in the map preview.

For maps showing a hemisphere:

For maps showing a continent or smaller areas:

This update was prepared in collaboration with @jwasilgeo and @jgravois.